"Painting: the art of protecting flat surfaces from the weather and exposing them to the critic." Ambrose Bierce, The Devil's Dictionary, 1911

Perhaps the most exuberant moment in returning an older house to a state of good repair is watching the paint finally go on. This is when all the disparate repairs that add up to renewal disappear into an integrated whole, giving the building an entirely new look. This is when that old paint scheme, badly faded if not worn out, maybe an eyesore if poorly chosen, finally disappears for good. This is also when your new colour choices either turn out to be fitting, possibly inspired, or not so much. The act of repainting the house is thus an uncertain moment for an owner, with much of the outcome riding on the skill, experience and attentiveness the painters bring to the humble art of applying colour.

A paint job that's exposed year-round to the insistent force of the elements will only last so long. Just how long depends on what goes into the work. Professional estimates I’ve seen range from a ridiculously short 4 – 6 years (if it's too cheap to be true, then it probably is) to a more-frequent yet still disquietingly short 7 – 10 years.  I’m pleased to say that my first experience lasted fifteen years and would have gone longer still had major repairs not made repainting a necessity.

Everyone who knows anything about painting stresses that a lot depends on the quality of the preparation you do, but in fact a good outcome depends on knowledge and quality being applied at each and every stage. Painting and decorating is a Red Seal trade in British Columbia, but it's safe to say that most people who do exterior painting don't have a trade certificate. So, much depends on the painting contractor and his level of knowledge and commitment to doing good work that will last. Good work costs, both in hours of additional labour before the exacting job of applying finishes, and in the quality of the materials used. My advice is to buy demonstrated skills and be prepared to pay for good preparation. Prep is the step we’re most likely to try to cheat on, as it’s labour-intensive and can run up the costs considerably. But, as with other things, you ultimately get what you pay for, and if your wooden building has gone a long time without care and attention, or had a lot of paint jobs of varying quality, expect to do a lot more prep.

Before anything else happens, the building has to be cleaned down with a power washer using a mild soap – skill at this stage keeps the building from getting soaked and needing a long period of drying out before work continues. Cleaning removes the dust and grime of years of exposure, as well as stripping off any really loose paint. Go for an inferior painter and this step is skipped or skimped on, resulting in poorer surface adhesion and paint that bubbles and cracks as moisture penetrates wood unevenly.

Once the cleaning is done, scraping of surfaces begins in earnest in order to get rid of loose paint, followed by sanding as needed. An amateur with a scraper can do a lot of damage to wooden components, marring surfaces and mouldings to an extent that will show through the new paint job. Sanding is used to regain profile where many layers of paint have built up – but it can wind up costing you profile if pursued too aggressively with machine sanders. Sanding is also useful in feathering out the edges wherever old paint has cracked or chipped, resulting in a better bond and a less bumpy surface. Like the house-repair process itself, of which painting is just the final stage, there’s a long period of time where the asset appears scruffier and less kempt by the day. Patience is required during this period – eye candy is on its way, but during this process it can feel like things are moving in the other direction.


For buildings like this with beveled siding, caulking of gaps between the runs follows sanding. Caulking can be a big job on a south-facing wall that takes a daily beating from the sun and rain. There’s an art to placing caulk durably, especially when one is up a ladder and using one arm to operate the caulk gun. Typically window sills that are subject to water and UV damage are patched up at this point too.

Once scraped, sanded and caulked, exposed areas are undercoated with white primer, in preparation for the main event. Then finally, sometimes after a good many days of labour in hot sun, the finishing colours begin to go up. It’s at this point that the chosen colour scheme starts to come to life, with its precise disposition on the various architectural elements (siding, trim boards, belly band and water table, gutters and downspouts, soffits, fascia boards, windows and doors). If the disposition is done artfully, the components will appear to be in harmony; if done poorly, the overall look may be disjointed or busy.

It takes real skill, good judgment and a refined sense of taste to achieve a colour scheme that really makes a building pop. This is not a matter of choosing loud colours, rather one of exploring relationships among colour hues and shades, and placing them sensibly on specific building components. The disposition of colour is not work for amateurs, especially on a character home (why get on such a steep learning curve when choice has such finality?). As painting consultant John Crosby Freeman says of arts and crafts era homes, “only when you select and correctly place different hues and shades can paint bring out the architectural logic of these homes.” Put a little differently, a good paint job expresses the underlying logic of the architecture itself – it expresses, rather than contradicts or minimizes, the continuities and contrasts of elements intended by the designer. 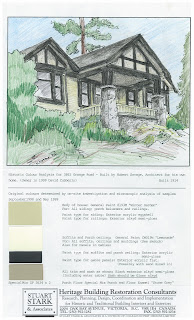 I admit that I sought help with colour (no shame there) because I could not have done it myself without missing opportunities and making lasting mistakes. Heritage building consultant Stuart Stark, vastly knowledgeable, did microscopic colour analysis of the paint history of the house before proposing a new scheme. I can’t claim that today’s colours are an exact replication of the original colours, but they do feel appropriate for the specific building. In the end Stuart settled on something consistent with Tudor-era buildings (a motif chosen for this rendering of the bungalow form by its original designer), pairing black and yellow with an off-white tint for the soffits and gable panels.

Stuart not only specked the colours, but also provided a rendering to give an impression of how these would look once placed. This made it much easier to say ‘yes’. The scheme was certainly bold – black is not a frequent arts and crafts colour, but it is consistent with the Tudor features apparent in such elements as the boards embedded in the gable ends. Over time, black became the traditional colour of the wooden members on Tudor buildings (derived it's said from the tar with which they were sometimes daubed to protect them against rot). Yellow is also consistent with a minority of Tudor buildings in certain English counties, plus it was a frequently used colour on California bungalows.

In addition to the colour scheme, there are also opportunities that present themselves in the course of the painting process if the contractor is paying attention and is creative. As an example from the first house repainting, we needed to disguise a poor choice of plywood as a replacement for original materials in the panels in the gables. On a truly Tudor building, this material would be some form of plaster, reprising the authentic wattle-and-daub surface. Our challenge was to mask the unwanted graining and the visible patches (the plywood was good-one-side, and some dummy had placed the patched side on the outside, which showed through the fading paint!) The solution proposed by my contractor, Mike Abernethy of Double A Painting, was to stir fine sand into a specially formulated paint, and then layer it on to give a finished look that effectively mimics plaster. That's experience at work!


It was the discerning application of colour to the architectural components as much as the colours themselves that sold me on Stuart's scheme – I would never have gotten that right working alone. By 2013, the house’s centennial year, this colour scheme had endured the weather for fifteen long years. Its original lustre may have been long gone, but I continued to find the overall effect convincing and was keen to see it emerge anew from a state of visible repair. That magic was applied by Mike's team at Double A Painting, well known in heritage circles around Victoria and the same firm that did the original job. Mike deployed two trusted hands to undertake the job – Dan Penney and Matt Beaulieu - conscientious painters who appreciated the value of the house and treated the building with respect.


When the colours went on this time around, there were no surprises - yet the overall impact on the building was still remarkable. My eye had gotten used to not looking closely at the gables and soffits, because they’d had white undercoat on them for more than a year. Watching the architectural elements emerge from a state of indistinctness into clear, bold relief is, to me at least, a special kind of magic. Two weeks after beginning, the finishing touches are now fully in place. It feels satisfying to have brought this piece of the puzzle to closure just in time for the Saanich fall heritage tour, arriving next Sunday. Now, can I get the windows cleaned before the crowd arrives and turns a critic's eye on these coloured surfaces?

There are any number of good books on period paint schemes for bungalows and arts-and-crafts houses. Also very insightful are these articles by John Crosby Freeman (the Color Doctor): 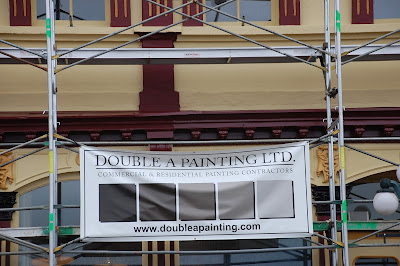 Posted by David Cubberley at 7:31 AM 2 comments: