If you live in a house built before WWII, chances are it came with some sort of ornamental detailing that ‘alludes’ to other eras in the history of buildings. By ‘alludes’, I mean that the detailing refers to, recalls or echoes something that was common in a prior time. Sometimes these details mimic groupings of features from a specific period, but more often, as with bungalows, they are an eclectic mix drawn from various times and places that a designer felt imparted a convincing look to a building. While such details may seem no more than arbitrary choices, how they work together with the form of your house is what gives it distinctive character.

Playful or serious, simple or grand, added-on or integral to structure, ornament that alludes to prior periods abounds on and inside older homes. Take those columns holding up the verandah roof – they might be turned wood in proportions reminiscent of the sleek Tuscan pillars of Roman antiquity, themselves allusions to stone pillars from ancient Greek temples.


Or perhaps they’re solid but stylishly chamfered posts that distantly recall the art of timber-frame carpentry.

The verandah’s railings might have delicate scroll-sawn balusters referring indirectly to an elegant table leg (upside down), or the roof over the verandah might lift slightly at the peak and tips in a vaguely oriental manner (below)...

or its shingles may be rolled over the edges in vague recollection of a thatch-roofed cottage....


or if by chance Craftsman-influenced, it may come with knee-braces, an allusion to post-and-beam carpentry.

All of these references are to things that worked in their time, that the eye liked generally and that felt like they belonged where placed. Architects chose and assembled them to impart distinctive character to individual buildings, in an era when how a house looked to the world mattered more than it does today.

Some buildings come with so many allusions that the eye sees a jumble, which can lack integration (a criticism leveled at Victorian-era buildings by modernists, with some reason). Other houses, like those of the bungalow era, are more chaste in their effect because the designers governed their choice with greater restraint (even though it was eclectic).


Craftsman-style houses were consciously designed to eliminate excess detailing, preferring a focus on proportioning, structural expression, and the drawing-out of effects from the inherent properties of finishing materials (like the wooden shingles alternated artfully below in a refurbished Vancouver home).

Often designers were very indirect in their use of allusion, burying their choices at several removes from any literal interpretation. A distant original served to inspire a novel interpretation without any attempt at literal replication.


Or, if designing for themselves, they deploy the allusions so indirectly that perhaps only they actually realize they exist.


And of course modernist architecture believes it doesn’t allude to anything but its creator's intentions, making it entirely pure and self-referential and thus hoping to avoid the 'problem' of being derivative.

The Hubert Savage bungalow came with a variety of allusions added to its distinctly California-influenced design (the bungalow form itself is laden with allusion to its origins in Bengal, India and its subsequent evolution as colonial architecture). As befits a design developed in 1913 Victoria – then a very English sort of place – this scheme refers overtly to Tudor-era buildings, as shown by its cross-gabled façade and decorative boards in the gable ends. A combination of boards and plaster panels in the gables hints at the wooden half-timbers and wattle-and-daub infill of Tudor-era walls, whose distinctive appearance still characterizes living buildings from that epoch. But they only hint, they don’t replicate.


Savage sprinkled Tudor references throughout his bungalow, as in the delicate arches above inset shelves built into the kitchen and dining room walls (photo below). This distinctive form of arch, albeit selectable on purely aesthetic grounds, suggests a desire for continuity with the English cultural past.

But Savage employed it as a motif to enrich the built-in décor of a then-modern house, not structurally as it was in Tudor times. This style of arch is unique in that its crown is flattened, similar to a Persian or Islamic arch from which it may have derived, and contrasting strongly with the pointed Gothic arches common in its day.

Other Tudor references common to many bungalows are the boxed beams in the living and dining room ceilings, recalling the exposed beams of Tudor ceilings, and the wood-panelling that lends a feeling of built-in furniture to the walls. Designers used these details not because they wanted an expressly Tudor look, but because they found them effective for the appearance and furnishing of their principal rooms.

Savage’s bungalow also comes with an array of leaded glass windows, in rectangular, diamond-paned and even a honey-comb pattern, which is consistent with Tudor enthusiasm for small-paned, multi-faceted windows.

Tudor allusions were widespread in Victoria houses of the day, a trend established by style-defining architects like Samuel Maclure, who deftly used them to render buildings expressing a comforting continuity with an apparently familiar past. Yet even in grand houses built for the uber-wealthy, these allusions were not an attempt to literally replicate, but rather an effective way of symbolizing continuity while gaining a desirable look and feeling for living spaces. Maclure’s expressive use of Tudor detailing produced striking buildings that remain convincing works of art to this day.


Not all of the Savage bungalow’s allusions are to Tudor. Nor are they all manifest or obvious, some being masked and inviting speculation. One that I recognized some years after moving in is a ‘face’ that’s clearly visible in the design of the brick fireplace. Once you make out this unusual feature, it’s obviously intentional, but typically it passes unnoticed because the eye simply doesn’t resolve the pattern in the brickwork. I used the room for years before mine picked it out against the background, but then it was inescapable. Heritage building consultant Stuart Stark, on the other hand, picked it up immediately with his detective-like eye.


But just what does this face allude to? There I’m afraid I’m going on hunches alone, simply because it’s not a literal reference. One possibility is that it’s just anthropomorphic, which is an ungainly term for the incorporation of human features into a building.This choice is akin to animism, whereby humans project a living spirit onto natural forces or animals, except that here it’s the human face rendered in the inanimate. But I don’t really think that this is likely, as there are no other indications in the building that I can detect.


Another line of speculation might interpret it around the primacy of the fireplace in the ideology of the bungalow, and the focal role it plays in the room where much of family life unfolded. Control of fire for cooking and heating is at the core of human cultural evolution and is celebrated in all familial life in settled communities (until lately, at least).

The fireplace and hearth remain potent symbols of our mastery of the elements and of the sense of domestic haven this control affords. In Greek antiquity (the crucible of western civilization), the hearth itself symbolized both family and domesticity, and was important enough to have its own Goddess, named Hestia, who oversaw the sacred place where fire was kept.

Hestia was among the primary gods of ancient Greece, venerated in temples where virgins apparently maintained sacred flames. She was also the primary goddess of domestic life, “the giver of all domestic happiness and blessings” and was deemed to be present in each individual dwelling. The bungalow’s prioritization of family life in a room anchored by a focal fireplace expresses continuity with these ancient domestic ways. So my hunch is simply that the face worked into the fireplace bricks is an indirect reference to an ancient hearth goddess who inspirited individual homes – a remote pagan allusion in a modern Anglican household. The thought that this face distantly refers to Hestia is reinforced by the fact that Hubert Savage was an architect building a hearth-centred home for his own family, and that Hestia is also credited in lore with having taught men the art of building houses.

I feel more certain of the meaning of another deeply buried allusion I think I’ve unearthed, in the form of a barrel-ceilinged back room that Savage tucked in under a roof extension. Designed as a summer tea room (as shown on plan), a British variant of the open sleeping porches often found in early bungalows, this tiny room serves many purposes integral to the home’s operation (back entry, hallway, utility hub, cooling cupboard, garden room, and more.) It can only work because of its barrel-vaulted ceiling, which scoops out just enough height to enable it to become functional.

I was attracted to the unusual curve of that ceiling the moment I first saw it (it gives the room a snug and cosy feeling), yet I had no inkling that it might be an allusion until many years on. It was while perusing Anthony King’s engaging history of the bungalow as the first global house form that I had an ‘aha’ moment. King relates the early twentieth century linkage of the bungalow with things bohemian and artistic in England, an association that arose from their popularity with theatre types who escaped to seaside locations where these recreational homes served as getaways. These resorts developed a bit of a racy reputation as enabling individual freedoms and looser styles of living, making them controversial in stuffy old England but emblematic of freedom for those more concerned to be hip. One community in particular, a resort named Shoreham by Sea, had clusters of these permissive bungalows in an area that came to be known as Bungalow Town. 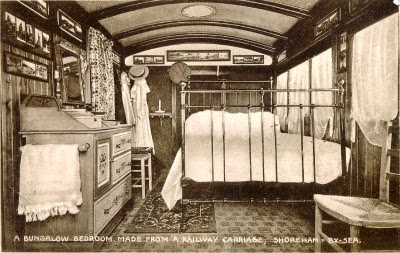 I was fascinated to learn that it was common at the time to use surplus rail-passenger cars as ready-made bungalows – often two or three of these would be attached and turned into serviceable recreational housing. (Railways were huge in England and fifty years after their first flourishing, there were a great many surplus rail passenger cars that were cheap to acquire). Pictures in Anthony King’s book illustrate a distinctive curve and banding pattern to the ceilings of these cars, some of which continue to serve as houses to this day. The curved ceiling in our back room is highly reminiscent of these early railway passenger cars. I can’t help but think that Hubert Savage, a newly expatriate British architect, building his own home bungalow-style near the seaside, took the opportunity to bury an allusion to these ready-made rail-car bungalows in his native England. And that, by extension, he reinforced an association of his modern bungalow with the ‘free and easy living’ that was being marketed as part and parcel of the bungalow lifestyle across North America.

Like most allusions in architecture, this is no more than an indirect reference to something past and unlikely to be seen as such by those who inhabit or use the building over time. Nor is it necessary to see it in order to use and enjoy the building. Yet these details comprise the building’s living character, and their particular combinations help create its distinct personality. I have to admit to a certain satisfaction in being able to recognize especially the buried references – it’s rather like being let in on a private entertainment.

Posted by David Cubberley at 8:54 AM No comments: